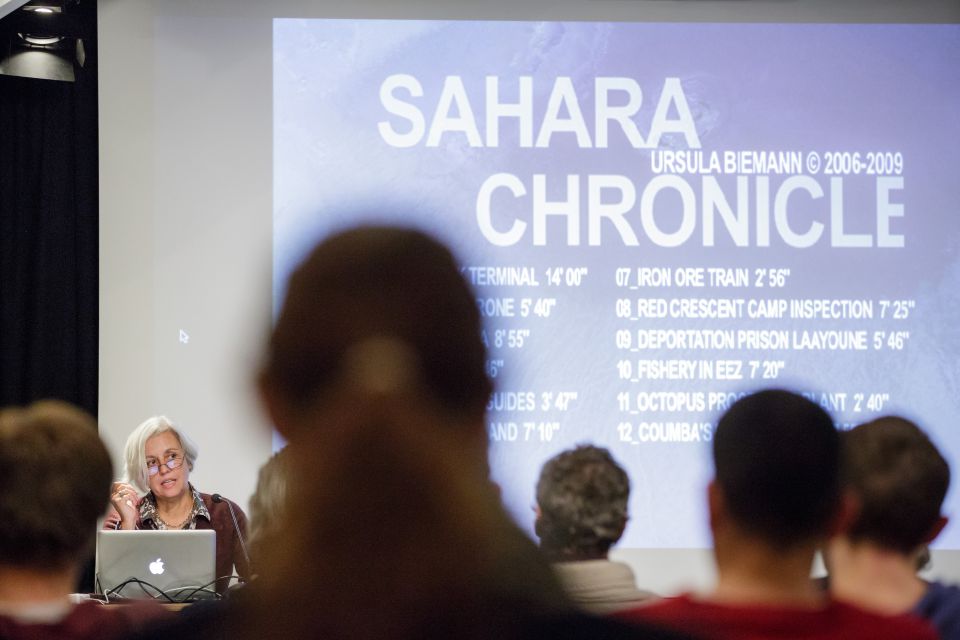 The videos of Ursula Biemann involve field research in far away places, exploring the post-colonial politics of space and the innovative practices of resistance that constitute the counter-geographies of clandestine mobility today. At the forefront of her practice is, as ever, a deeper investigation of how reality is constituted: First, through the movement of people as a space-producing practice. And second, through a series of experiments of how the artist could inscribe herself in the very space that she is producing both by physically traversing it, and by generating videographies. By discussing two distinct aesthetic approaches, Sahara Chronicle and Contained Mobility, the artist raises epistemological questions of how knowledge is produced through the engagement with local histories. Her practice also proposes an installation in the art space that allows us to experience how a multiplicity of personal stories finally merge into a transnational system that unfolds in the minds of the viewers.

Ursula Biemann is an artist, writer, and video essayist based in Zurich. She investigates global relations under the impact of the accelerated mobility of people, resources and information. Major art projects on oil and water include Black Sea Files (2005), Egyptian Chemistry (2012) and Deep Weather (2013). She conducts research at the Zurich University for the Arts and Michigan State University, and is publisher of several books. Her video installations are exhibited worldwide in museums and international art biennials of Liverpool, Sharjah, Shanghai, Sevilla and Istanbul. She is appointed Doctor honoris causa in Humanities by the Swedish University Umea (2008) and received the 2009 Prix Meret Oppenheim, the national art award of Switzerland.