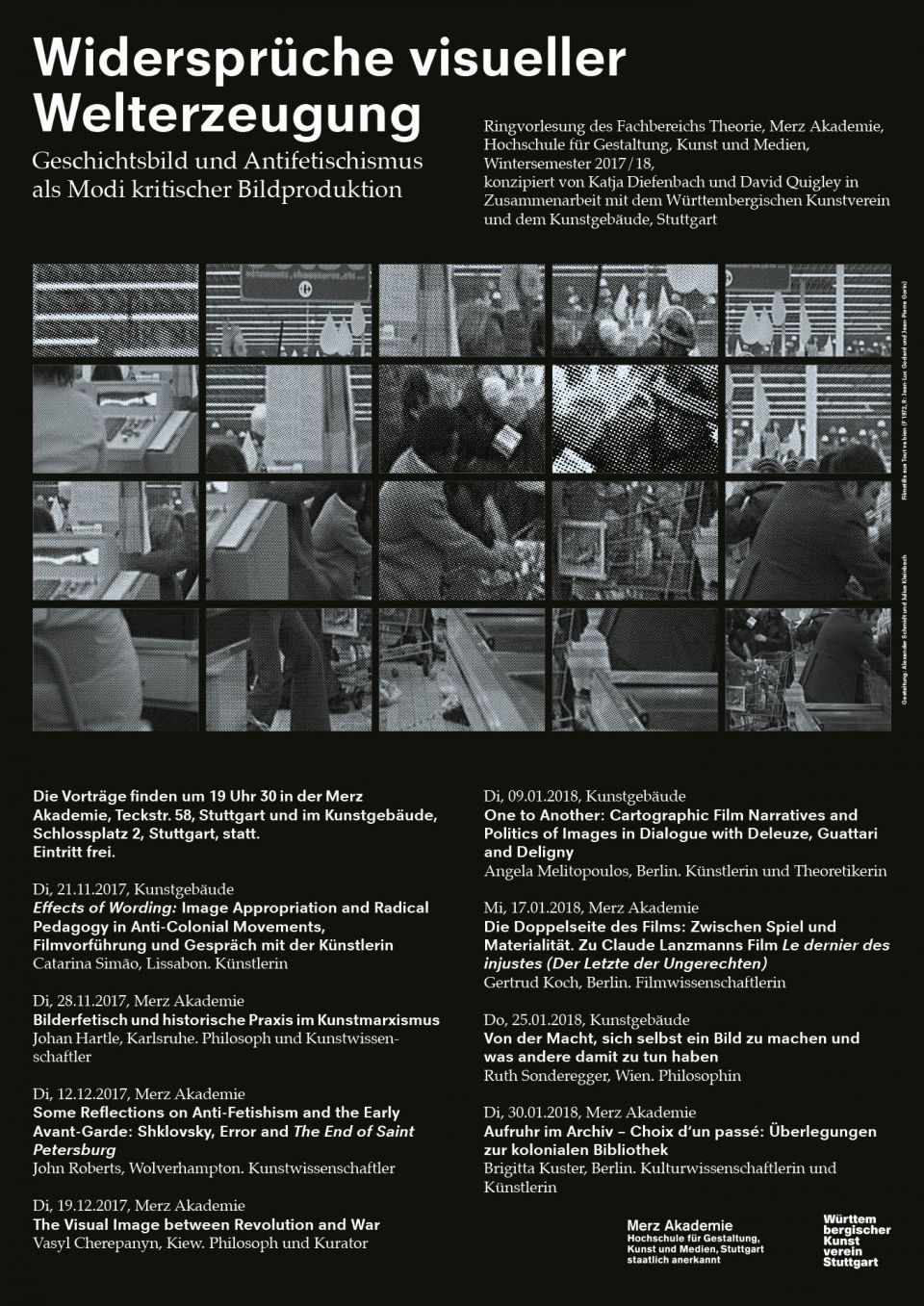 Historical Image and Anti-Fetishism as Modes of Critical Image Production

Made during the first part of the 1970s, Jean-Luc Godard and Jean-Pierre Gorin’s film Tout va bien, the second-to-last film produced by the Dziga Vertov group, remains an important example of the problems associated with political imagery and visual world making. Combining defamiliarization, persiflage and self-reflective stylistic devices, the film introduces an aporetic realism that remains relevant to understanding the current relationship between politics and aesthetics:

On the one hand: it is shown that the radicalism of realism is not expressed in the mimetic representation of “objective facts” but rather in a critical fictionalization that emancipates viewers from the primacy of linear narration, allowing them to enter into a discontinuous temporality between the divergence of the audio and the visual and the disruption of conventional paradigms of meaning and perception. It is with this displacement that a different perspective on the political itself is made possible. It is not in finding more or less adequate representations but rather in the production of yet unseen and unknown visual worlds in which truth manifests itself.

On the other hand: in contrast to the avant-gardes and realisms that came about in the wake of the Russian revolution, we are here confronted with the production of images more immediately influenced by the experience of coopted revolts and failed encounters between young activists and the working classes which in turn led to new ideas about the multiplicity of their compositions, tested new forms of actions and partially emancipated themselves from party and trade union hierarchies. Although during the 1970s numerous forms of critical image production multiplied between various media, with, for example, the advent of Third Cinema, feminist filmmaking, Expanded Cinema and new photographic documentarianism, the aesthetic regime bears witness to the failure and becoming-irrelevant of social struggles and to the absorption of their cultural expressions into processes of increased commodification.

This series of lectures discusses the contemporary significance of the contradictory status of the production of visual worlds along the lines of discussions related to the antithetical notions of antifetishism and the historical image.

In this historical context, an aporetic image emerges in art that accentuates the voice, poetry and the visualization of the subaltern, the exploited, the misfits, immigrants, workers, women or queers that at the same time reveal what is not socially recognized in their images and voices. The fact that in Godard and Gorin’s film the workers reject trade union reformism and decide to occupy their factory, reflecting upon their own practices, painting the walls of the factory in blue and modernizing the pictures without their forms of expression and practice finding social acceptance, is indicative of the tension that today marks critical aesthetics: We find a political and poetic protagonism that contests the division into social and artistic fields of action and inscribes itself into both, with new forms of digital text, video or mobile film activism and self-reflexive art and image production that do not shy from formal complexity. At the same time, these new forms of contestation are confronted either with a lack of impact and interest, or with being coopted by processes of commodification and capitalization that assimilate as many signs and symbols of dissidence as possible. And along these lines, the heightened attention paid to the small details of life, to the marginal events and forms of expression shared both by the aesthetic regime of modernity and the mechanisms of advertisement and commodification is also part of the strategy of biopolitical disciplinary and security regimes in their attention to the most everyday articulations of human bodies.

This series of lectures discusses the contemporary significance of the contradictory status of the production of visual worlds along the lines of discussions related to the antithetical notions of antifetishism and the historical image. Attention should not only be given to the emergence and escalation of this contradictory situation but also to the challenges and conservatisms  linked to the critique of the image world qua spectacle, here thinking especially about Debord and the Situationist Internationale following in the tradition of the Lukácsian and the Marxian critique analyzing late capitalist society as a machine of total alienation, as the fundamental separation from the possibility of immediate experience obscured by an “immense collection of spectacles.” Instead of imagining the ideal coincidence of the sublation of capital and art, which would presuppose that political, cultural, and ideological hegemony could be understood in terms of separation and alienation (which in the end implies a logic of potential reconciliation), this series of lectures reflects images and art as entities of a third order, as socially disputed objects whose meaning cannot be finally totalized—but rather can only be politicized. Taking into consideration many of the issues raised by the pictorial turn, deconstruction, as well as poststructuralism and affect theories, the presentations will explore how social, poetic and visual, as well as scientific and ideological actions are superimposed upon the existence, use and life of images, and how in these processes of overdetermination one could begin to propose what a politics of images in biopolitical capitalism could be, one that would also always imply images of politics. The lecture series strives to combine multiple perspectives including the question of the visual representability or non-representability of extreme or abstract forms of political violence and domination in times of omnipresent visualisations.